The Blunderer, or The Counterplots 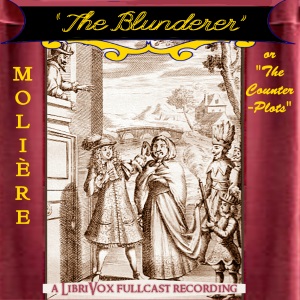 The Blunderer, or The Counterplots

LibriVox recording of The Blunderer, or The Counterplots by Molière.
Read in English by ToddHW; Larry Wilson; Sonia; Leanne Yau; Devorah Allen; Eva Davis; Nemo; TJ Burns; Zames Curran; Tomas Peter; alanmapstone; Son of the Exiles
A very early Moliere. From the Translator: "In this piece the plot is carried on ... by a servant, Mascarille, who is the first original personage Molière has created; he is not a mere imitation of the valets of the Italian or classical comedy; he has not the coarseness and base feelings of the servants of his contemporaries, but he is a lineal descendant of Villon, a free and easy fellow, not over nice in the choice or execution of his plans, but inventing new ones after each failure, simply to keep in his hand; not too valiant, except perhaps when in his cups, rather jovial and chaffy, making fun of himself and everybody else besides, no respecter of persons or things, and doomed probably not to die in his bed." - Summary by ToddHW